[Video] Deflategate -How Temperature Can Influence Pressure in a Football

[Video] Deflategate -How Temperature Can Influence Pressure in a Football

As an engineer I was intrigued by the #deflategate controversy and theories surrounding the New England Patriots. Again, as an engineer I like to test theories against real-world conditions. Basically I wanted to find out whether or not temperature can actually influence the pressure (measured in psi) of an official NFL football enough to account for what was seen during that infamous Patriots Colts playoff game - so I set up the following test:

I placed two official NFL footballs in our calibrated thermal chamber and let the footballs reach equilibrium at 24 C (75F) - the approximate temperature when the NFL officials tested the pressure of the Pats' balls.

I also used an infrared camera to confirm the initial temperature of each football. The balls were then placed back in the thermal chamber and the temperature was then set to 10 C (50 F) - the game time temperature!

I left the footballs in the thermal chamber for 1.5 hours, before checking the ball pressure again. I found that the psi had indeed significantly dropped for both balls. The first ball dropped from 13.4 psi to 12.3 psi, and the second ball went from 12.6 psi to 11.5 psi.

The experiment proved that changing the temperature of the air in a football impacts the air pressure of the football. This conclusion is based on the data from our test demonstrating that the balls lost over one psi when they went from a 75F environment to a 50F environment where they sat for 1.5 hours (the balls in question probably sat in 50F environment for more than 1.5 hours.)

Based on Bill Belichick's explanation of how the game balls are prepared, we performed a final demonstration showing how a "scuffing" a ball, similar to what the Patriots probably to do prepare the balls for the game, can add thermal energy to the football which would increase the air temperature within the football.

The ideal gas law was discovered in 1854 (http://en.wikipedia.org/wiki/Ideal_gas_law), but apparently some renowned scientists such as Neil deGrasse Tyson and Bill Nye may need a little refresher on how to do the calculation correctly!

While not a steel container, a football behaves much like a fixed volume as Wilson the ball manufacturer has indicated, so for this calculation the Ideal Gas Law is appropriate to use.

So, where have many experts messed up? They are using gage pressure in the calculation and not absolute pressure. You have heard a lot about the NFL requiring footballs to be at 12.5 psi, actually that is 12.5 psi GAGE or psig, which is the pressure relative to the atmosphere while absolute pressure is relative to a perfect vacuum. The atmospheric pressure which surrounds all of us is about 14.7 psi. The atmospheric pressure is also not fixed due to various factors including weather and altitude (check out our Air Pressure at Altitude Calculator!) Anyway, to get the absolute pressure you simple add 14.7 psi to your gage reading, so the NFL minimum pressure requirement is 12.5 psig + 14.7 psi = 27.2 psia.

Now, using the Ideal Gas Law we can calculate what the pressure in a football should be in the event the temperature drops from 75F (24C) to 50F (10C). Another important point that I'm sure Neil and Bill did get right, you need to use the Kelvin scale for temperature, simply add 273 to the Celsius temperature.

Neil’s mistake on his calculation is easy to make. He most likely used the gage pressure in which case he found that the initial temperature of the ball would have had to have been much higher for the pressure to drop as much as the Patriots claim. The percentage drop in pressure using the correct absolute scale was only 4.7%. 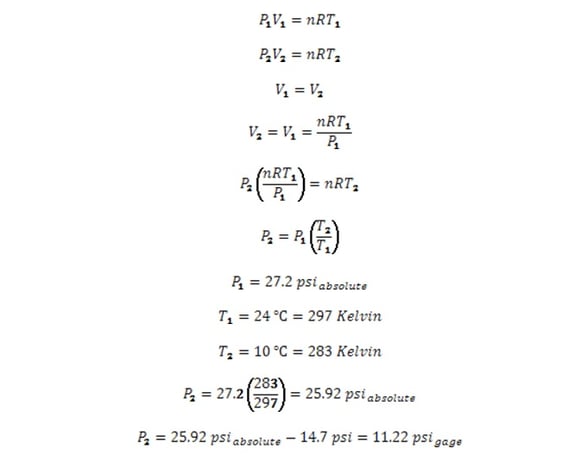 These calculations support the experimental results well. I believe they would have been even closer if I had allowed the footballs to soak for longer at 10C, the thermal camera shows they were only down to ~12 C at the time of the recording. Also, I measured the surface of the ball and that does not tell the entire story of the air temperature inside the football. Using the above equations with a starting pressure of 12.6 psi as the specimen had and assuming the temperature was only down to 12 C I arrive at a predicted pressure of 11.5 psi, EXACTLY what was measured. Since these results prove a 1psi drop in pressure should be expected, a ball starting at the low end of the NFL’s acceptable range (13.5 to 12.5 psig) would easily fall out of the range, however a ball that started at the high end of the range would end up at the lower end of the range and therefore be considered acceptable by the referees.

The bottom line is that anytime the temperature of the football changes, the pressure will also change in a predictable way, it’s basic physics!

Chris Ludlow is the Vice President of Engineering at Mide Technology Corporation. Chris has spent the past 15 years developing technologies and...